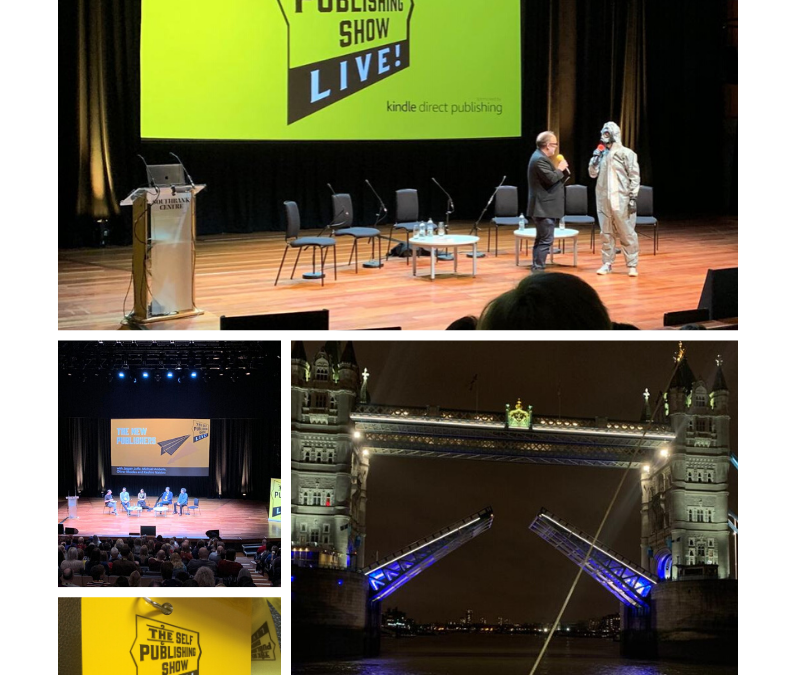 The Self Publishing Show was to be a prelude to the London Book Fair, a warm-up for indie authors from around the world before invading the international meet-up for the book industry. However, as big publishers pulled out of LBF one by one it soon became apparent it would be cancelled and so it was. Despite this, the SPS went ahead as planned, hosted by Mark Dawson, James Blatch and John Dyer and am I glad it was.

For those who don’t know, the Self Publishing Show (formerly Self Publishing Formula)  has been a fantastic and highly professional source of information and content for Indie Self Published authors since 20xx. They’ve produced a podcast as well as excellent courses including Ads for Authors and Self Publishing 101.

So after debating whether to go, considering Coronavirus was days away from been confirmed as a Pandemic, we loaded up on hand sanitizer and headed to London.

The Queen of Kindle

First up at the Grand Elizabeth hall on South Bank embankment was a Q and A with crime thriller writer LJ Ross, a seller of 4 million books. We heard an inspirational story from Louise of her author journey to massive success. Louise spoke about her taking inspiration from real locations, a good example is her first book: Holy Island in Northumberland.

Joanna Penn treated us to a whistle-stop blitz on multiple streams of income for book indies – a theme later echoed by Mark Dawson dubbed ‘sweating your assets’ but more of that later. Joanna suggested authors look at their IP even if they were traditionally published authors who be leaving some tights in the table. One book or product can become multiple products beyond the standard ebook and paperback. Products like hardbacks, large print editions and translated versions. Joanna is currently offering Multiple Streams of Income as a course on Teachable.

Next up was the 1000 x £100k under the radar panel, designed to highlight those quiet earning authors earning £50k and up as a ballast to the outliers that our community often hear about. As if to reflect the recent International Women’s Day all the panel were female. We heard from, amongst others, Kris Butler writing biker romance and Karen Ingris producing children’s books, all making good bank by utilising online advertising to promote their books.

Making a Living with Non-Fiction

Marc Reklau and Joseph Alexander fielded the questions on how they make a living from writing and publishing non-fiction. Marc is a lifestyle coach and has written multiple books in his ‘Change your habits, Change your life’ series.

Joseph Alexander has built a powerful brand called Fundamental Changes in the music learning space with books and resources by an expanding team of authors.

My favourite part of the conference focused on how the new digital-first publishers are making waves in the ebook world. This has an incredibly insightful discussion on publishing in today’s market with Jasper Joffe of Joffe Books, Michael Anderle of LMBPN, Keshini Naidoo, co-founder of Hera Books and Oliver Rhodes of Bookouture.

These new Publishers are finding incredible success by bringing author talent to the market with much more generous terms than traditional publishers but also the advantage of a more agile operation.

10 Tools to Grow Your Publishing Business

Ricardo Fayet, from Reedsy, kicked off with a presentation of 10 Tools to Grow your Publishing Business. There were a few tools that would be very familiar to any indie who’s been knocking around for a while but also some unknowns.

There then followed a panel with Dan Wood (Draft2Digital), Ricardo Fayet (Reedsy), Corey Alderin (Book Brush.) Some great tips on each of their services and indie publishing in general.

Mark Dawson
Last but certainly not least came the SPS Maestro, Mark Dawson, as he wrapped up the day with a presentation on the 8 mistakes made. This was an entertaining run through starting with several excellent reasons why writers should dispel certain myths around Traditional Publishing based on his own experiences.

All in all it was excellent, full of great panels and talks and most attendees would probably agree to have been fired up afterwards. We stumbled through the rain to jump on board the Dixie Queen afterwards and enjoyed a glass of prosecco as Tower Bridge on the Thames raised to let us through.

All these types of events are usually about the other people you meet and network with. My big regret is that I didn’t reach out and meet enough fellow indie authors.

You can purchase a digital ticket to watch a full re-run of the conference here.